The House of Commons has decisively rejected the Prime Minister's Brexit deal. Is Parliament "taking back control"? We will find out in the coming days.

Our thanks to everyone who has helped or supported our campaign for a Peoples' Vote - with an option to remain - so that the people of this country have the final say on Brexit. Tonight has been a big step forward, and we will be continuing to campaign in the coming days and weeks.

If you are able to help in any way, please let us know by visiting this page.

This evening MPs finally vote on Theresa May's deal - but already the Government are saying that if the deal is defeated, then MPs will be asked to vote on it again - with a new motion but with 'much the same form' and 'the same content' according to Attorney General Geoffrey Cox.

And on the BBC's Today programme this morning Michael Gove said "[some] MPs are changing their minds".

All of which begs the question - if MPs get to vote twice, and can change their minds, why are the rest of us being denied a chance to show if any of us have change our minds?

If those who believe in Brexit aren't willing to let the people of this country have the final say, is it because they are frightened they might lose a Peoples' Vote?

North East for Europe wishes everyone a happy new year!

Whether Brexit happens on March 29th or not, we know 2019 is going to be an eventful year!

Parliament is due to return on 7th January and to vote on the Prime Minister's deal on 14th January. After that? who knows?

Even if the Prime Minister wins on 14th January, new legislation then needs to get through Parliament in the following weeks before an orderly Brexit could happen. Will the Government need to delay the Brexit date?

And if (as most observers seem to think likely) the Prime Minister loses on 14th January, will we be heading for a "no-deal Brexit" - something the Government itself thinks will be so problematic that they are spending millions of our money in all sorts of ways to mitigate the difficulties - even hiring companies that don't have any ships to run ferry services!

But if Parliament can't agree, then passing the question back to us, the voters, may be the only way forward.

Opinion polls show increasing support for a People's Vote - and also for stopping Brexit. For many people Brexit may have seemed like appealing in 2016, but now that we know more about what it involves many people are having second thoughts. People in a democracy have the right to change their minds, especially when more facts are known. As a country we should not continue with Brexit if the majority of people don't want it. The only way to find out is to have a People's vote!

So at North East for Europe we will be celebrating the new year and pressing it to be the year for people, not just MPs, to be given the final say on what happens with Brexit.

you agree, and want to help us, please let us know.

Is this the deal that people voted for?

Wednesday 14th November - 874 days after the referendum, the Government have finally (just about) agreed a deal with the EU. No-one knows if Parliament will agree to it, but it has united hard core Brexiters and Remainers in saying that it is worse than staying in the EU.

People are poring over the 500 pages of Withdrawal agreement, and the much shorter statement about future relations with the EU that are still to be negotiated during the "transition period", but we do know that

This is not the Brexit deal that the Leave campaign spoke about. It is not what millions of people voted for in 2016.  There are two million people now aged 18, 19 or 20 who were too young to vote in 2016 who have had no say on Brexit, and we live in a democracy, so, as David Davis said, that means people are able to change their minds.

So if the Government want to put this deal forward, they should put it to the people.

North East for Europe, with many others across the country (there were 700,000 of us on the streets of London 3 weeks ago) is campaigning for a People's Vote.

Increasing numbers of MPs from Labour, Conservative ( including Boris Johnson's brother), Green, Lib Dem, SNP and other parties are backing a People's Vote. And we have a few weeks left to convince others that this is the best way for the country to move forward.

Time is short. If you agree with us, please come and help us. Visit our Events page to see what is happening next, sign up to help at our volunteer page or make a donation. Anything you can do will be appreciated

We had a great march and rally in Sunderland on October 6th, but the BIG Peoples Vote march is going to be in London on October 20th. Already thousands of people from across the country have signed up to be there.

If you think the decision on any Brexit Deal or (leaving with no deal!) is too big to be left to just the politicians, if you want a Peoples Vote on the deal, please join us in London if at all possible.

What you can do now:

North East for Europe are arranging meeting points for people from the North East before the march, and a social afterwards for those taking a late train or are not in a rush to leave.

We are also delighted to confirm that David Milliband is sponsoring a coach from South Shields to London (and back). Updates on this will be posted on this page.

Sunderland, and the North East as a whole, is set to be particularly badly hit by Brexit. Sunderland is a great city with a proud history and on October 6th we will be celebrating Sunderland's strengths and its strong business and cultural links with Europe and demanding that the people of Sunderland and across the country should have the final say in a #peoplesvote on the final Brexit deal.

If you ordered a new Nissan and it wasn't the colour, size or shape you were promised(*), you wouldn't buy it. We know Brexit won't be all that was promised (easiest deal ever? £350million for the NHS?), so why shouldn't we all have a chance to decide if we want to keep it?

Join us in Mowbray Park (near the War Memorial and Winter Gardens) from 1.30pm, for a march to Keel Square at 2pm and a rally with a great set of local, regional and national speakers.

* Fortunately you don't get the wrong size, shape, model, colour etc when you order a Nissan car. Unfortunately, that's not how Brexit is turning out

Too big to ignore

Brexit is too big to ignore

And our latest banner popping up at rush hour on roads around the region is also hard to ignore: 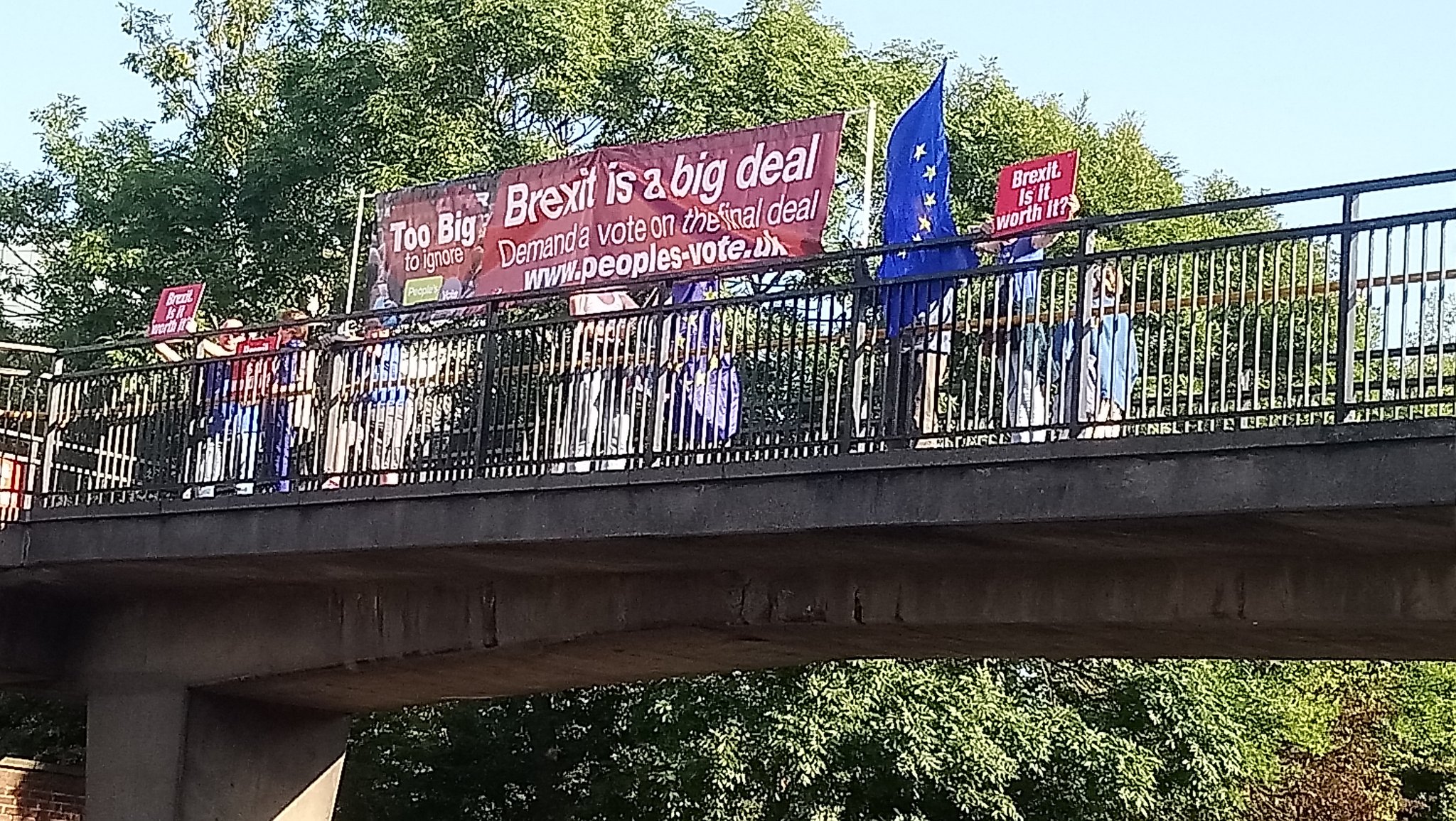 Whatever you think about Brexit, we can all agree it is important.

We think the decision on the final deal (or no-deal) should be made by all of us, not just politicians in London.

If you agree, please sign the petition at www.peoples-vote.uk/petition

North East for Europe have announced plans for their next rally to be in Sunderland in October.

With the North East is set to be the region worst hit by Brexit, it is time to take stock of the situation. Whichever way people voted in the referendum, no-one did so to be worse off, but that is the future facing our area according to Government and independent sources.

We are particularly worried about the impact on local jobs especially regarding Nissan who have clearly stated they need the UK to stay in the Single Market to operate. The effects of leaving the single market and the consequent need for customs checks on both imported components and finished cars exported will be very serious for flagship employers such as Nissan, and also for the many local firms who are part of their supply chain.

Sunderland and the North East as a whole have benefited from EU regeneration funds, often despite poor support for our area from the government in London, but also from huge investment by overseas businesses who have come here because of the combined effect of quality of the workforce and being in the huge European 'single market'. As a result the North East is one of the best exporting regions of the UK, and around two-thirds of those exports are to the EU.

North East for Europe want to celebrate the business and cultural links Sunderland and the region has with the rest of the EU and is calling for a Peoples Vote on the final Brexit Deal which is destined to be a pale shadow of what Leave campaigners cklaimed it would be in 2016.

Details of the October rally are due to be announced shortly. A crowdfunder appeal has been launched to help meet the costs of the rally. You can donate through JustGiving or direct to North East for Europe

Petition for a People's Vote

On Sunday, the Petition for a People's Vote on the Brexit Deal was barely 24 hours old, but already had over 80,000 signatures. How fast can it grow? Do you want to leave Theresa May to have the final say on Brexit, or is it time to take back control?

You can find out more and sign up here 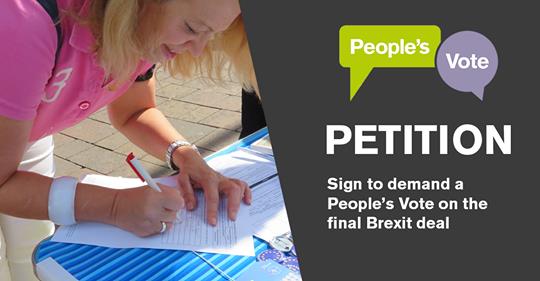 North East for Europe joins the march for a Peoples Vote

This Saturday there will be a strong contingent from the North East of England in London for the March for a People's Vote.